We serve the Catholic community by offering resources and teaching that support faith formation for children and the people who guide them.

Want To Join The Church?

The History of St. Joseph’s Parish

The town of Farley and the parish of St. Joseph’s Church have a long, strong history of leading the local Catholics in support of community and God’s work.

As the outpost of Farley grew in the early 1850s, Mass was held in the homes of early Catholics such as Laurance McGuigan. As the railroad brought more Catholics to the area, by 1861 a church was needed. Being the first local church, parishioners attended the frame church from as far away as Hogansville (now Epworth), Centralia, Pleasant Grove, and Worthington. This frame building was quickly outgrown and in 1865 (close of the Civil War), a rock church was built for the imposing sum of $10,000. At the time it was the largest and grandest in Iowa outside of the Cathedral in Dubuque. This grand facility was located north of Farley and on the east side. Even as it was completed, some of the members questioned the wisdom of building so far from the center of Farley Junction as it was called.

As the rock church was located 1 mile outside of the town of Farley and several of the now older parishioners found it very inconvenient to fight the weather to get to mass, in 1912 the difficult decision to move the church site was decided. By this time there were 98 families in the congregation and they felt that it was time to grow the Church building, build a new school and add a parochial residence inside the town of Farley. It would be the first time in the state of Iowa that such an aggressive project would be undertaken. This was a monumental task to be done at the same time, yet the pioneering spirit of Farley and the support of the congregation members was tremendous. Once again Farley would show that its Catholic leadership would be a shining example to the surrounding community. In the span of 8 months Farley tore down the rock church (so that the rock could be used as foundation for the new brick church), built and dedicated the brick church, parochial home, and the school. Just as impressive, it was all paid for by the congregation in 18 months! These two aggressive goals that were met were used by priests throughout the Archdiocese as to what is possible when people choose to prioritize their Faith.

In 1956, St. Josephs parishioners added a modern handicap accessible school. The first class to graduate from the new facility was in 1958. This building housed the St. Joseph High School until it closed. For several years after the high school closed the Western Dubuque County Community School District rented the facility and held 9th grade classes there. Today the facility is used as a middle school for Seton Catholic.

While the 1912 school has been replaced, the Church and Rectory stand strong and proud as reminders of the solid foundation that Farley is built on.

Much of the solid foundation of Farley comes from the strong-willed German ancestry of the Kluesners, Schuellers and Simons that are prevalent at St. Josephs. So it is appropriate that Fr. John Ptacek brought with him an idea for a Julyfest. This church fundraiser is a take-off of Octoberfest with games, food, an auction, and fun for all. Wildly popular since its inception in July of 1991, it continues to be a source of pride and fellowship for the church community.

Today St. Joseph is a thriving congregation of approximately 600 families that continue to build on the legacy set forth by their ancestors. St. Joseph has many opportunities for the community to gather and share their life and faith. In addition to the Saturday and Sunday masses and Julyfest, annual events such as the Lenten Fish Fry and Thanksgiving Breakfast allow for young and old, new and longstanding members to share their day and make memories. St. Joseph is now a member of the St. Elizabeth Pastorate.

FACTS about the Pipe Organ at Farley 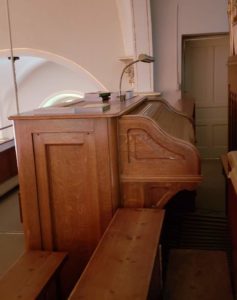 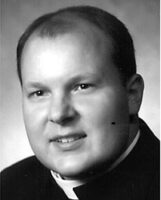